The Health Benefits of Blackberries

Blackberries Are More Than Just a Phone

Is it summer when you are reading this? Late spring?If you live in Dixie that’s pretty much the same thing, of course, but for that matter late winter in the South would be considered summer in New England or the Pacific Northwest. Regardless of when you are reading this, the warmth of the solstice means it is blackberry picking time. Who doesn’t have fond childhood memories of plucking these plump and juicy, or sometimes tart, gifts from God or Mother Nature, whichever being you prefer to put your faith in.

Summer is not quite summer unless you have come home with a bucket full of berries that would be more full by half if those inside your belly were added. A summer without wondering whether that red liquid streaming down your finger is blood or blackberry juice is no summer at all. Why should you pick up where youth was left behind and set out on an expedition to pick blackberries today…or in a few weeks or months depending on when you may be reading this?

Blackberry cobbler when done right is the best cobbler in the world. If you don’t possess quite the culinary talent necessary to make cobbler, then a blackberry pie is the next best thing. Of course, you can’t eat a cobbler or pie every day, but when you wake up in the morning, there’s nothing finer than slathering a delectable blackberry spread across the face of freshly toasted bread. Of course, cooking blackberries will rid them of much of their high octane nutritional value. Those blackberry seeds that tend to get caught within the nooks and crannies of your teeth are a tremendous source of fiber. A mere half cup of blackberries picked and eaten in the raw (in reference to the berry, not to the picker) will plump you up by just 40 calories while providing a full 25% of the Recommended Daily Allowance of vitamin C. That same half cup of blackberries also is rich in such vital nutritional goodies as folate, vitamin E, iron and calcium. 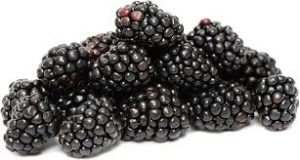 Blackberries are also chock full of something ellagic acid. Scientific research has found that ellagic acid may help in the prevention of certain cancers. Even better news is that cooking blackberries doesn’t appear to have a detrimental effect on ellagic acids. What does that mean? That means that you now have a bona fide reason to eat that blackberry cobbler and spread that blackberry jam on your toast. Doing so just may help to avoid or stave off the accelerated growth of cancer.

As with all things, however, there is a majordrawback to eating blackberries. Certain people who have an allergy to aspirin have also appeared to have the same reaction when eating blackberries. This reaction is due to the fact that blackberries contain an ingredient found in aspirin in its natural state: salicylate. For that reason if anyone who his allergic to aspiring should consider avoiding them.