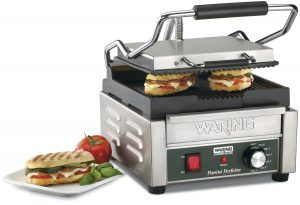 In the restaurant business, you need appliances that can help to speed up cooking times while also cutting down on clean up times. Professional grade Panini machines are designed for tough everyday use and must also be very versatile in order to allow you to optimize cooking times by preparing more than just sandwiches using this type of machine.

Fortunately, Waring, a popular appliance company, has produced their own extensive line of Panini machines that can also grill meats and burgers, giving your kitchen much-needed versatility in a large model that’s tough enough to handle your busiest times.

The Waring commercial WPG150 Panini grill features a stainless steel finish and large removable drip tray. This model is the perfect choice for restaurant owners that offer an extensive menu consisting of a variety of Panini sandwiches and grilled meats. This model’s versatility is its biggest selling point, but the fact that it also has a reputation for reliability and power makes this machine essential for any restaurant.

Not only does this model toast a wide variety of sandwiches, but it’s also able to cook poultry, steaks, pork chops and fish to perfection. Does your establishment feature roasted meats, turkey, fish and chicken? This commercial version of the Panini press can truly do it all and just in a fraction of the time.

If you’re used to traditional, smaller Panini press models, you may have your work cut out for you in the kitchen, especially if your business is a hot spot for lunch and dinner. When the orders start pouring in, you’ll quickly learn that your smaller sandwich maker is unable to handle much volume.

But once you use this Waring Panini press there will be no doubt that it will quickly become one of the most useful machines in your kitchen. Whether you’re running a small café, deli or sandwich shop, or even a formal restaurant with a large dining room capacity, this model is a must-have to get orders out in time and cook each dish to perfection.

Essentially, owning a press of this size can allow you to double or triple your profits. Now, you’ll have a powerful machine that can handle higher volumes with ease.

Using this model means that more gourmet sandwiches will be coming out of the kitchen and out to the dining area. Within just a few short minutes, customers can enjoy whatever sandwich or grilled meat dish they ordered.

This commercial model differs from a conventional home Panini press mainly in the aspect of production. This commercial sized machine is able to cook a larger number of meats and sandwiches at the same time. And this Waring model is much wider and bigger, but still offers the same type of easy clean up you’ve probably come to expect from the average Panini press. The typical home style model will only allow you to cook one or two sandwiches at a time.

This model also features a surface that slants in a manner that allows oils and fats to drip away from the food, promoting healthier dishes your customers will love.

This compact Italian Perfectto Panini grill features ribbed cast iron plates that provide quicker cooling times and an overall faster cook time. This model also comes with a power on indicator light and handles that are heat resistant. This machine operates with 120 volt AC fifteen ampere power and has a 5 to 15 P plug rating, in addition to NSF certification.

This is a machine that really doesn’t mess around. A very heavy duty industrial model, the large sturdy design still fits well on any countertop and the non-stick coating works to significantly cut down on clean up. 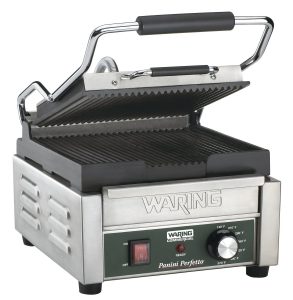 Pros: This model’s cast iron grill offers perfect heat distribution and heats up quickly. This is one massive grill that will allow you to make multiple sandwiches at once as well as cook chicken breasts and burgers. Once you flip the switch this model is able to heat up perfectly after about ten minutes or so. We recommend using cooking spray or olive oil to make clean up easier and toast your bread a golden brown.

Cons: One consumer who purchased two of these units for their business stated that both models stopped working after just a few months, and was caused by a type of short in the wiring. While the manufacturer was happy to exchange both units, unfortunately, the replacement models also stopped working. The issue the second time around seemed to involve the lower heating elements. The consumer stated the plates were unable to get hot enough to grill meats. Another consumer stated that the plates were almost impossible to clean and had begun to rust. Consumers also reported that the grill rests unevenly on the top of the sandwiches and unfortunately, there is no way to adjust the lid. The front end of the machine also seems to tip up when using thicker bread. Consumers who are looking for a more powerful, accommodating model can look at the Breville Panini maker and grill, which is offered at a comparable price.

Many consumers felt that this particular model, while marketed as a commercial quality device was simply not up to the task of handling the kind of volume it needs to when being used in a professional capacity. Many consumers who purchased this model for home use had no complaints at all.

Consumers who purchased Waring Commercial WPG150 Compact Panini Grill for professional use were not satisfied with its performance, stating that it was only able to handle rough everyday use for a period of a few months. Consumers who purchased this model for home use were very satisfied with how well it functioned and mentioned that this machine added a ton of convenience to their kitchen. Consumers gave this Waring Panini maker a rating of four and a half stars out of five stars. While not recommended for commercial use, this is the perfect model for large households.