How I Conquered My Worst Health Habit: Smoking 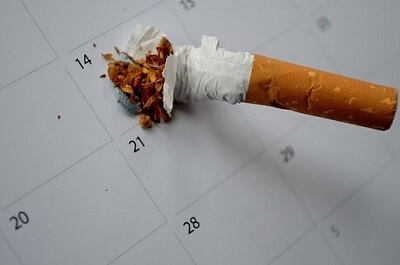 I started smoking at the age of fourteen, as a freshman in high school, buying cigarettes with the money I was allotted for lunch. Since this was the mid-1980s, very few people carded me and very few people cared if they sold to minors. If I came across someone who carded for cigarettes, I would just pay an adult to buy some for me. By the age of fifteen, I was a two pack day smoker, even waking up in the middle of the night to have a cigarette.

Since I was young, I thought I was invincible and didn’t think I’d suffer any ill effects from smoking. However, at age sixteen, I started to get throat infection constantly. I couldn’t walk up stairs without my breathing being labored. Finally came the bronchitis at seventeen, that was so severe, I was almost hospitalized and had to take several weeks of antibiotics in order for it to clear up. The physician that attended to me informed me that if I kept smoking, things would only get worse. So, I took his advice, and devised a strategy to quit smoking.

I had heard from several people who had already tried to quit, that slowly tapering down did not really help, so I decided that I would conquer my addiction by going “cold turkey”. First, I performed some calculations at how much buying cartons of cigarettes were costing me a year, which at the time, was upwards to $300 a year – that gave me some extra incentive to quit. I decided that I could put that money to better use. I also lived with other smokers at the time and I asked them to hide their cigarettes and no matter how much I begged them, not to give me even one. The first three days were rather miserable and I wanted to smoke, but keeping really busy and chewing gum helped to get me past my cravings. After three days had gone by, the craving to smoke subsided. Though I did have a few puffs of a cigarette a few years later when I was in England, I was never a smoker again. It has been twenty years now since I last smoked. These days, I cannot stand smoke and refuse to be around it. I love my health too much.