Dandelion (Taraxicum officinale) is one of the most widely recognized wild herbs. Nearly everyone is familiar with the sunny yellow flowers and delicate white puffballs of seeds known as dandelion clocks. Unfortunately, the medicinal value of dandelions is not so well known, and these beneficial plants are often sprayed with herbicides by people who want to discourage them from growing in their lawns. 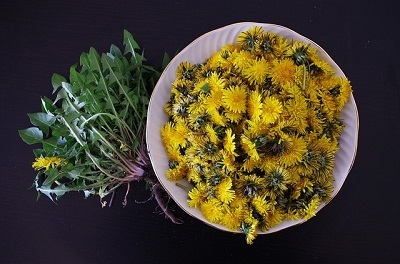 Dandelion is a perennial plant native to Asia and Europe. It was brought to North America during colonial times and now grows widely throughout the US. The name dandelion is derived from the French “dent de lion” which means “lion’s tooth,” because of the jagged shape of the leaves. Some common names for dandelion include blow ball, wild endive, fortune-teller, yellow gowan and clock flower.

Dandelion has been used medicinally at least as far back as the 10th century. Both the roots and leaves of dandelion have medicinal properties. Dandelion leaves can be eaten fresh as a vegetable, or dried and made into a tea or tincture. Fresh dandelion greens can be cooked and eaten as a potherb, added to soups and salads, or used in recipes in the same way as other leafy greens.

The leaves of the dandelion possess strong diuretic properties; they are useful to relieve water retention and can be taken to treat mild hypertension. While they do not specifically have antibacterial activity, they are often added to herbal formulas for bladder infections to increase urine flow. In addition, the potassium contained in dandelion helps to prevent potassium depletion, which can occur when taking other types of diuretics. 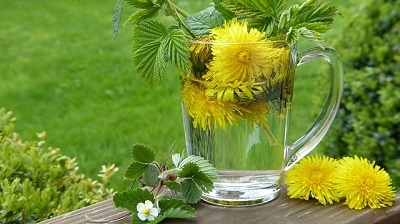 Dandelion is valued as a blood purifier and liver tonic, and is used to treat a variety of liver conditions including hepatitis and cirrhosis. It is also beneficial to the spleen, stomach, pancreas and kidneys. Dandelion may be useful to help relieve stiffness in those with joint diseases such as arthritis and rheumatism. A tea made of dandelion leaf acts as a mild laxative to relieve constipation.

The long taproot of dandelion can be dried and ground up to use as a coffee substitute, and the flowers can be made into wine.

The pollen of dandelions may cause allergic reactions in those who are sensitive to ragweed. Since it increases the flow of bile, it should be avoided by those with disorders of the bile ducts or other gall bladder ailments. Never use dandelion if you think it has been sprayed with any type of chemical herbicide. 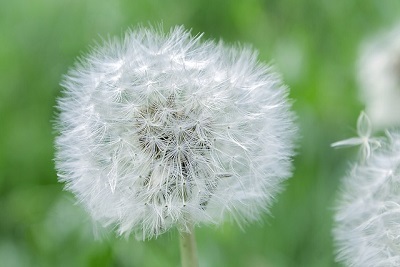 This information is for educational purposes only. If you have a health concern, see a qualified health care provider.