The Health Benefits of Garlic

With more than six million Americans now afflicted with heart disease every year and nearly a half million dying from heart attacks (according to the Center for Health Statistics) it is no wonder that there is a growing health emphasis to eliminate the problem.

The good news is that continual public awareness campaigns against smoking, fatty foods and the promotion of more healthful living habits is beginning to pay off. Officials at the Center for Health Statistics now say that the rate of coronary heart disease is declining annually.

One of the key barometers of heart related problems is high cholesterol levels because the buildup of plaque restricts the blood flow. Discussions about cholesterol today get almost as much attention as the weather. Doctors and public health officials advocate keeping cholesterol levels below 200. Because of the interest in cholesterol, scientists too are working hard on effective “natural” ways to reduce cholesterol that are productive and inexpensive along with low-fat, high fiber diets.

Dozens of researchers are now concentrating their work on one particular herb, garlic, because it has proven to be so effective in reducing cholesterol as well as performing some other important jobs in the body to restore health. The popularity of garlic as an effective medicine, according to scientists, is because there have been enough studies done to show that it can reduce cardiovascular disease. And now, a researcher using an aged garlic extract has been able to lower serum cholesterol in a special study group subjected to strict scientific guidelines.

Two research groups at the University of Wisconsin and Peon State University in separate experiments said cholesterol was lowered in animals and chickens using aged garlic extract. In addition, they also found that using the extract prevented the buildup of cholesterol in the liver, which produces about three times as much cholesterol as eating food. 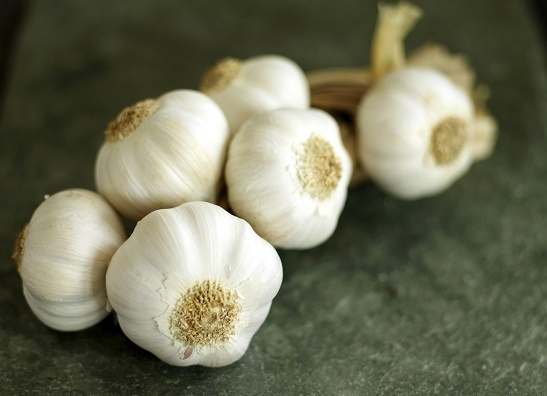 Taking raw garlic for medicinal purposes is not attractive to most people, because of its lingering odor. Taken in large quantities, it can also cause a burning sensation in the stomach as well as digestive tract disorders and anemia. By aging garlic, its toxicity is greatly reduced, according to Dr. O. Imada, a researcher for the M.D. Anderson Cancer Center.

The significance of aged garlic goes even further, says Dr. Robert I. Lin, the leading authority on the subject and chairman of the First World Garlic Congress. There is enough new evidence to show that Kyolic, aged garlic extract and one of its active nutrients, S-allyl cysteine, cannot only lower cholesterol, but also prevent blood from clotting. The garlic extract, according to scientific studies, lowers triglycerides, which are the fatty acids in the blood. Garlic lowers the blood lipid levels and reduces the tendency of blood clotting, it may also reduce the risk of cardiovascular disease. As a result of these studies, consumer demand for aged garlic extract is on the upswing, according to health food store retailers.